Getting gender pronouns right can be challenging. Here's why it matters. 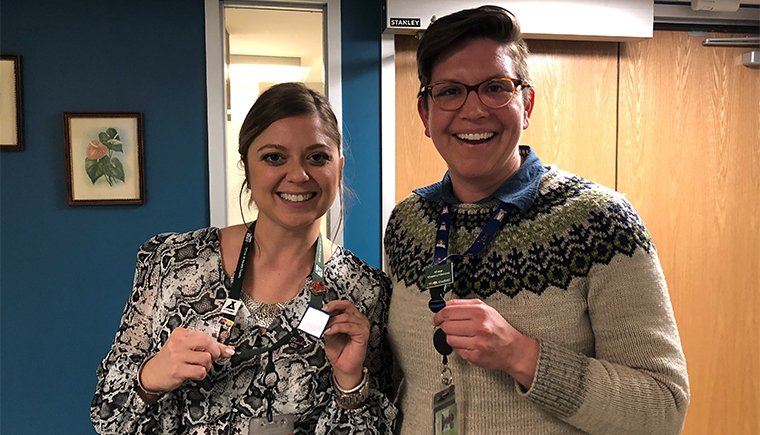 It’s the first question most people ask when they find out someone is having a baby: A boy or a girl? Expectant parents typically decorate nurseries in shades of pink or blue. A more recent trend is the gender-reveal party, where parents-to-be let loved ones know, perhaps through blue balloons or pink-frosted cupcakes, that they are welcoming a boy or girl.

These conventional patterns often continue with dolls and ballet for little girls, toy trucks and Little League for boys. And while these traditional gender identities feel perfectly natural for some, they aren’t right for everyone. Something as seemingly simple as being called “he” or “she” can feel uncomfortable and wrong.

That was the case for Ruthie Kolb, who uses the pronouns “they,” “them” and “theirs.”

“Pronouns matter because they reflect how you see yourself,” said Kolb, a training specialist with CDHS’s Colorado Sexual Health Initiative team. “I don’t see myself as female even though that’s how I was born,” they said. “It doesn’t feel good or right, it feels icky when people use feminine pronouns for me.”

Using the pronouns that feel authentic to a person is important because it “ensures equity,” said Chelsey Hall, two-generation manager at CDHS. Through her role, she works to help people create success by understanding and meeting their individual needs and recognizing their unique identities, including gender.

Gender more than a sum of its parts

People typically assume a person’s gender based on the body parts they can see, Kolb explained. But even biology can be undefined, they added, noting that one in 100 people are born with some sort of biological gender anomaly — which can include chromosomes, body parts, etc. — and one in 2,000 are born with ambiguous genitalia. Gender involves more than biology, Kolb said: “The truth is we all have a gender identity. It might be what you were assigned at birth, but we have no idea what another person is thinking about themselves or what’s in their pants.”

Because of Kolb’s conservative upbringing, they didn’t feel comfortable expressing their gender as a young person. “As a child, I didn’t have a word for myself,” they said. “I began peeling off layers to become more and more myself. It takes time to give yourself permission.”

Jason Kent, who works for the Office of Behavioral Health, described a similar journey to self-awareness and acceptance. “I haven't really liked to talk about it, but I've had a complicated relationship with gender since I was a child,” they said on their Facebook page. “I've buried my feelings, and my hurts, on the subject my whole life.”

After years of struggling with a gender identity that didn’t feel right, Kent did some research and shared an epiphany with their Facebook community: “After a lifetime of feeling like a liar because of the body I was assigned, I finally came to a realization: I'm nonbinary. Realizing this about myself felt like coming home, like a weight had lifted off my chest, like I could finally find some semblance of sanity in this physical form. The first time I heard someone use they/them pronouns for me I almost cried with joy.”

Honoring a person’s unique identity is at the heart of using his, her or their preferred pronouns, Hall said: “It’s the individual’s choice.”

Small steps can go a long way in creating a workplace that respects everyone’s gender identity, Kolb and Hall said.

Ways to be an advocate:

These behaviors can feel unfamiliar at first, Kolb said, noting that everyone starts at a different place with their own backgrounds and understanding of gender. “You don’t ever know what people’s experiences are,” they said. Acts of advocacy can help take the pressure off someone who wants to be recognized as their authentic self, said Kolb: “Sharing your pronouns gives space for others to share theirs.”

“We all have pronouns,” Hall said. “Why wouldn’t we want to share?” She acknowledges it can be easy, especially at first, to accidentally call someone by the wrong pronouns. “We’re still going to mess up,” Hall said. “The goal is to strive for progress.”