When nothing goes according to plan 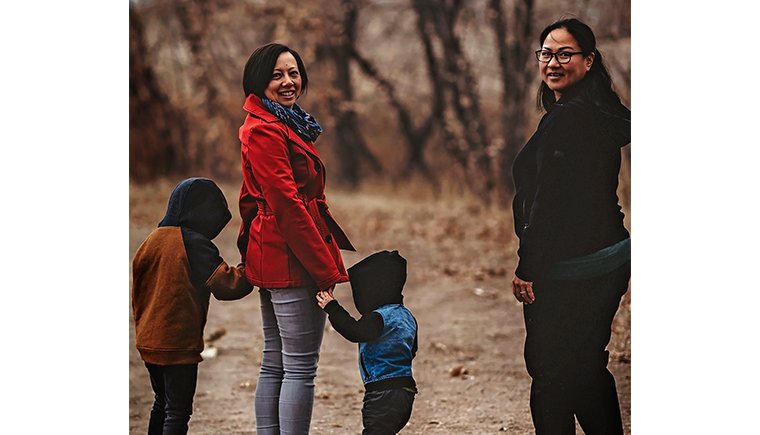 For foster parents Kirsten and Katy nothing has gone according to plan. To say that becoming foster parents had many unexpected twists and turns for this couple is an understatement. Determined to make a positive impact on children in foster care, the couple persevered to overcome many obstacles and challenges along their journey.

“It was on my dating profile and it was something I was hoping for. It was really hard to do it as a single person, so I knew it would be better to have a partner. Katy knew coming in that it was something that I wanted. After we had been together a few months, we went to an informational meeting,” said Kirsten, who had been certified as a single foster parent for a short period of time while living in another state.  “She was so passionate about it, but didn’t have a lot of experience. I trusted her and saw there is a big need. We had an opportunity to provide a lifestyle many kids haven’t experienced,” Katy said.

Although the first informational meeting they went to was at Mount St. Vincent, Kirsten and Katy decided to go through another organization for their training because the timing of the classes worked better with their schedules. They really enjoyed the experiential training classes they took, but when they went through the home study process they were denied. Although they were given permission to go through the process with the first organization again, they chose to go back to Mount St. Vincent.

“We were really upfront in telling Mount St. Vincent we had a denial. They considered it and did the home study themselves and decided to move forward with us,” said Kirsten. However, Kirsten and Katy were met with yet another hurdle with the home they were renting at the time. “The landlord was also renting a garage that had been converted into a house to his cousin.” Although this other tenant did not have access to their home, a background check was still required because they shared the same address.

Kirsten and Katy didn’t give up. A few months later the couple got married and purchased a home together. In December 2019, nearly two years after starting the process, they were officially licensed as foster parents. They planned on being foster parents to children in the 5 to 10-year-old age range. “I wanted a kid who could talk and tell me what their needs were,” Katy said. Their plan was to start out by providing respite care to other foster families.

While providing respite for a foster mom, Kirsten and Katy were thrown another curveball. The foster mom was injured in a car accident and the county asked if they could continue caring for the 4-year-old and 1-year-old brothers.

Although their plan was to start with respite, Kirsten and Katy chose to continue caring for the brothers. “They had already been with us for five days. They were in a honeymoon phase, but they were somewhat stable. We were fearful that they would get bounced around if we didn't take them,” said Kirsten.

Shortly after the boys came to live with them full time, the COVID-19 pandemic brought more obstacles for the couple who both worked full time. The child care and Head Start programs they were enrolled in closed, Katy lost her job because of the pandemic, and Kirsten was working as a trauma therapist to children and youth. Kirsten was trying to work remotely while caring for children who have also experienced trauma. On top of that, they no longer felt it was safe to lean on Kirsten’s parents and other nearby family members for support, and their foster parent support group was no longer meeting in person.

“Someone from one of the child care facilities called to ask how they could support us. She told us about an emergency child care program and this fantastic facility took them. It was a godsend to have childcare. I could do tele-health from home and eventually, I switched jobs,” said Kirsten. “Nobody is holding your hand saying these are the resources available to you. You just have to talk to other foster parents and figure it out.”

Despite the significant challenges, the pandemic gave Kirsten, Katy and the two brothers the opportunity to immerse themselves in each other's lives. The brothers now have lots of structure, a consistent routine and a regular sleep schedule. Although most in-person services were shut down, Kirsten and Katy were able to connect the kids to the services they needed.

Kirsten describes herself as stern yet warm and empathetic and a parent who likes to create a lot of structure and routine. Katy describes herself as more goofy and silly and likes to play around and joke with the kids, but is also quick to redirect them when needed. After over a year and a half with Kirsten and Katy, the plan is that the boys will reunify with their family soon. Afterward, the couple plans to take a vacation and have a few months off from foster parenting to reset.

“The most rewarding part is the progress I have seen in them. We took care of them, nurtured them, gave them good nutrition, education, structure and care, and we have seen day-and-night progress. It is amazing how far they have come from where they started. We were a part of that growth for them. It is very rewarding and satisfying,” said Katy.