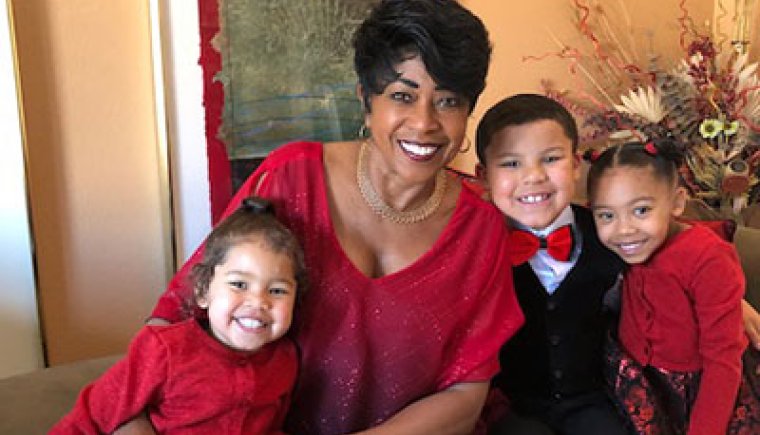 Sandrena Robinson is doing well today but 2016 was a rough year. She was worried about her daughter who was mentally ill and pregnant.  She was worried about her grandchildren. She was also worried because her mother was terminally ill. In the middle of her year of overwhelmingly worry, Sandrena was comforted by a caring new friend who always asked her, “Have you stopped worrying yet?”

Her new friend was Kerrin Schultz, who helped to pioneer the new kinship navigator program at Arapahoe County Human Services. The day they met, Kerrin could tell that Sandrena was overwhelmed while trying to navigate the process of beginning to get legal custody of her grandchildren, Silas, then four years old, and Madison, a few weeks away from turning one-year-old. Kerrin immediately hugged her and told her it would be ok. Sandrena and Kerrin shared a warm but professional friendship after that day.

Sandrena is moved to tears when she speaks of her late friend Kerrin who passed away last year. Kerrin was a great mentor in her role as a kinship navigator. Sandrena, a busy mom of three who works full time as a property manager at 67, speaks to caseworkers and other kinship families regularly as a way to help carry on her late friend’s legacy.

“For those of us that would step up, that have found ourselves in this precarious situation, we're scared to death ….  we're questioning. Do I have the stamina? Do I have the resources? Initially, it's just too overwhelming,” said Sandrena, who is thankful for the resources that the Arapahoe Kinship Navigator program provided for her family.

As 2016 continued, so did the hardships. A month after she began caring for her grandchildren, Sandrena’s mother passed away. In June, Sandrena’s daughter gave birth to her third child LuAnna (affectionately called Luna) who went to live with a foster family. Sandrena and her family had regular visits, and she eventually got custody of her third grandchild when she was 10 months old. Sandrena provides love and safety to her three grandchildren who now call her mom or “Gigi.”

“The one thing that children want to know first of all is that they're loved. Secondly, that they're safe. Thirdly, that there's somebody there that will listen to them, that will hold them when they're frightened or they're sick,” said Sandrena. “That's just good parenting in my opinion when a child just feels safe.”

Having three young children keeps Sandrena young. They go to church together. They attend all school activities as a family. They sing songs like “Thank You Lord” and “We Are Family” by Sister Sledge, use their Colorado Get Out Pass and go to the library. Silas likes soccer, and Madison has joined a nearby theater club. Luna, a very precocious (now) three-year-old who loves books, tries to keep up with her brother and sister.

“I've been very fortunate because people have surrounded us as a family and supported us as family,” said Sandrena.

Reflecting back on the turbulent year of 2016, Sandrena realizes she couldn't have done it without the support she received from the Arapahoe County Kinship Navigator Program.

“Kerrin and I spent a lot of time talking about the kinship experience and what she could do to make it better and sharing that information with others,” said Sandrena. “I hope others who find themselves in a similar situation will embrace the opportunity to keep their family from falling apart and step up for children in their lives.  As Mark Twain said, ‘There is never the wrong time to do the right thing!’”