A single dad perseveres through patience 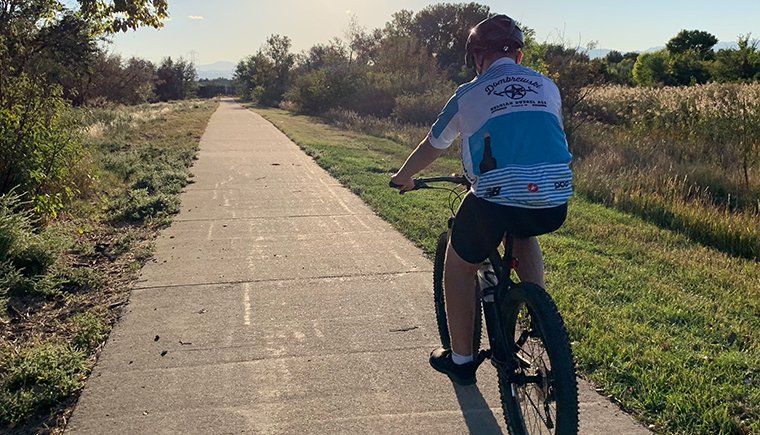 Drew and Kyle are a father and son who share a close bond and enjoy biking, playing video games and taking photos while hiking in the mountains. Kyle plays the trombone and wants to join the swim team.

Kyle had been waiting for a permanent home for several years when Drew adopted him from foster care at 15 years old. In the year and a half he has lived with Drew, Kyle has become a better communicator, has grown emotionally and has improved both his behavior and his academic performance in school.

“There's a lot more flexibility in a lot of ways. Teenagers can be by themselves for an afternoon, they can go hang out with some friends. Eventually, they'll be able to drive,” said Drew. “There's kind of an inherent independence, that is nice for a single parent.”

Drew set out on the journey to become a foster parent knowing he wanted to help teens. Drew started out fostering temporary placements in Tennessee. After he moved to Colorado, he knew he wanted to pursue a more permanent placement with an older youth. Drew says talking with friends who are also parents to teens offers perspective and reminds him other parents are sharing in the same frustrations. While being a parent to a teen has challenges for all parents, Drew is quick to point out that parenting any age group comes with its own challenges, as well as advantages.

At first, Kyle would sometimes be dishonest, so having open honest communication was a big challenge that took a lot of patience and persistence to overcome.

In addition to becoming a better communicator, through his relationship with Drew and participating in animal-assisted therapy at the CAAT ranch in Arvada Kyle has begun to grow emotionally as well. He is learning to take a moment to process his feelings before he expresses his emotions.

“There would be a  huge, emotional, massive fight over something that was totally not a big deal, but became a big deal because he didn't know how to handle it emotionally,” said Drew. “He has learned to take a big deep breath and think about it. After we had a couple initial blowups, we agreed that if either of us is in a position where we know we're about to lose it, you say, "Look, I just need time. I'm going to my room," and we respect that.”

Whereas Kyle struggled in school in the past, he is thriving in his new school. He has brought his reading level up and he hasn’t had any detentions or major disciplinary issues.

“One of my best friends is the music teacher at the school he goes to. If he has a problem, he knows he can go into his room and knows he can call him Derek, and he's a friend. He knows he has a safe space there,” said Drew.

Having a one on one relationship with a male role model and receiving a lot of individual attention has helped Kyle grow and build trust. Drew strives to recognize the things that Kyle does right rather than focusing on negative consequences. Positive reinforcements like receiving movie prop $100 bills which he can save toward his first car when he is doing well in school has been a big motivator for Kyle. More than rewards, however, simple recognition from Drew has been incredibly meaningful for Kyle.

“He made like an A on his report card. I said, ‘I can see that you've been struggling. This is tough for you, but I'm really proud of you that you made this A.’ He got really quiet, and then almost started crying and said, ‘No one has ever been proud of me for school before,’” Drew recounted.

As a single parent, going through the foster care process Drew felt fortunate to have the support of Kyle’s team. Kyle’s Wendy's Wonderful Kids recruiter would take him out for one-on-one time, giving Drew some respite time, and Kyle’s CASA volunteer, adoption placement caseworker and social worker provided logistical support throughout the adoption process. Since most of Drew’s family lives out of state, he had only invited a few close friends to the adoption proceeding, but to both Drew and Kyle’s surprise, there were about 40 people who came to celebrate Kyle's adoption.

“It was insane. The caseworker that originally removed him from his home had followed his case and showed up at the adoption proceeding, and that was seven years ago,” said Drew. “I mean, there were tons of people who were really involved and helped him. It was very refreshing that so many people were there to support him and be part of the proceeding.”

Kyle and Drew have discussed Drew adopting another teen from foster care. Kyle now wants to be able be a positive influence for another kid who was in the same place he was in. Through adoption, Kyle and other teens approaching adulthood can find a lifelong family.

“It's a lifelong thing, it's not just while they're a teenager and while they're in care. You're giving this person something for the rest of their life, and that's the part that I want people to see,” said Drew. “Everybody needs a family, even 23-year-olds. Everyone needs a support structure.”