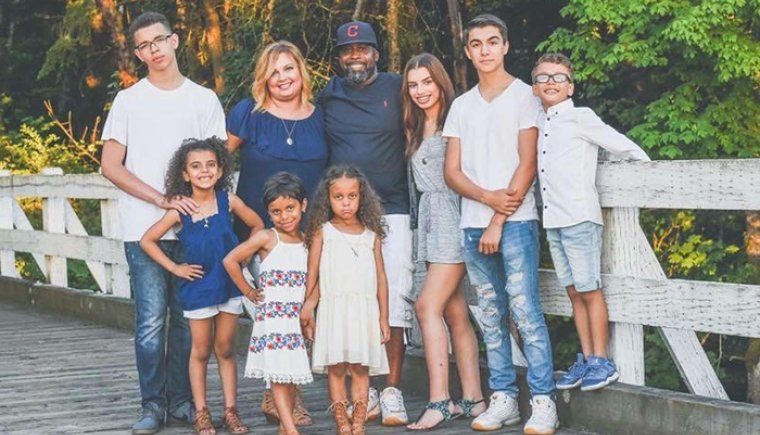 Christina and Antoine’s large blended family was already a real-life “Brady Bunch” before they became foster parents.  Both single parents of two when they married, Christina and Antoine then had three children together making them a family of nine. Although having such a large family was a financial struggle at first, they are now in a position where they want to help others.

“My mom, my aunt and my uncle were all adopted from foster care, so my brother and sister and I are all products of the foster care system via our mom,” said Antoine of why he felt drawn to become a foster parent.

“This experience has opened their eyes to a bunch of things and made them look at us in a different light and have more respect for us,” said Christina of their biological children. “It has shown them that parenting is hard and sometimes when families fall on hard times or there is addiction this could happen and opens their eyes to the real world.”

Although having such a large family has its challenges (they have to take two cars to go anywhere as a family), Christina has found some advantages too. Each week all of the older kids are all paired with a younger buddy who they help through their daily routine, doing things like helping them get a drink or pushing them on the swings. Although Christina is always nearby to step in when needed, the buddy system helps the older kids contribute and learn responsibility in addition to keeping a good flow to the family’s daily routine especially while Antoine is at work during the day.

“Our kids have relationships that are different from ours, and they (kids in foster care) might say things to them that they don’t to us. They view them as brothers and sisters, and they are so excited for them and are their biggest cheerleaders. They rejoiced when our boys (the three brothers they are fostering) went to see their mom and when our 18-year-old learned to ride a bike,” said Christina. “When we do respite care or new kids come to the home, the kids in foster care who have been here longer feel like they can help too and give back and be on the other side of it. They are sharing their space and helping them now.”

When Christina and Antonie began caring for a two-year-old in foster care, she would scream and yell due to her past trauma. Although it was a challenge, they have been patient and forgiving, reminding one another that this was the only way she knew how to communicate while teaching her new ways to communicate.

“Everyone's story is unique and different and it’s not fair to lump everyone in a box. These kids aren’t bad, in fact they have all been amazing,” said Antonie. “The biological parents are just having a rough moment in their lives. Being a parent I can only imagine the experience of losing a child, I try to put myself in their shoes and be understanding and compassionate. If they lash out at you they are frustrated, and I don’t take it personally.”

Antione, Christina and their family celebrate the successes of the children they foster and their families. They say that reunification is one of the most rewarding parts of fostering.

“When there isn’t reunification it is hard and messy but reunification stories are beautiful and need to be told. We have seen their mom completely transform her life,” said Christina of the mother of three brothers they are fostering. “I can’t do anything but smile for her and rejoice for her. They are going to be ok and her kids have two moms now. They are part of our family now.”