Creating a place of belonging 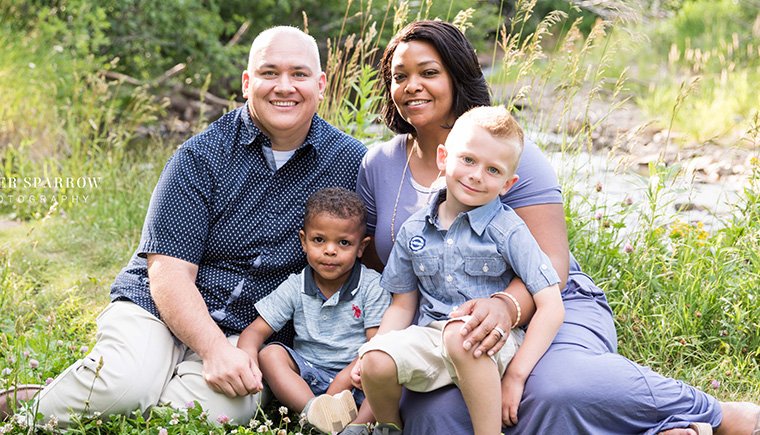 Many foster and adoptive parents can relate to the experience of getting odd looks or questions when being out in public with children who don’t look like them. In addition to the joys of having four young children through adoption, Nichole's less common journey to parenthood has also given her many stories about strangers who assume that she is not the mother of her children. Both Nicole's family and her husband’s family consists of many races and ethnicities. Nicole is Black, her husband is White and Hispanic, and they have two White children and two biracial (Black and White) children. To say they get their fair share of stares and rude comments would be a fair assumption.

“I know I am not the only one who experiences this, but sometimes I don’t enjoy going out because I can feel the eyes,” said Nicole, who said she has shared these experiences with others including a close friend who has also biracial children. “When there is an unconscious bias your mind can’t process what you don’t think is normal.”

After trying to start a family for seven years, Nicole and her husband Robert turned to foster care as well as embryo adoption to help grow their family. Since beginning their foster care journey in 2015, they have adopted two children from foster care and are in the process of adopting a third child from foster care. As a family with multiple races and ethnicities, Nicole discusses race with her children frequently but wishes all families would have these discussions noting that when others begin acknowledging that families come in many different shapes and colors, those unconscious biases are removed.

“When my two-year-old daughter, out of the blue, says, ‘I’m White, mommy is Brown.’  I just rolled with it and we went through our family tree of White, Brown and Black people and added “is beautiful” after every distinction,” said Nicole of how she speaks with her young children about race. “Most importantly, I always end with ‘Is that your family?’ And I am happy and filled with love and joy when she answers, ‘Yes! My family.’”

Nicole also points out that when fostering children of a different race and culture it is important to be mindful of not only the culture they come from, but also their family’s identity.

“Culture is different for everyone. Not every Black, Hispanic or Asian home is the same. Something you believe is culturally correct for that child might not be depending on the family they come from,” said Nicole.

In addition to the children they have adopted from foster care, Nicole and Robert have also fostered several other children who have reunified with their families. Many of those children still keep in touch with their former foster family. While some keep in touch over the phone and Skype, one little boy who came to their home as a 14-month-old continues to visit with them every other weekend even after reunifying with his biological mother.

“He is turning four now. He was here for two and a half years so staying in touch with our family gives him consistency and is what is best for him. He knows that he has two sleeps, then he is going back to mom,” said Nicole.

Although Nicole describes the children she has cared for as being ‘on the mild side of trauma,’ she is also frustrated when people from outside her family don’t recognize some of the behaviors that are created by trauma. By recognizing the root of these behaviors, Nicole has learned some valuable tools for helping young children learn to deal with trauma.

“I will ask him, ‘Are you calm?’ Then I say, ‘show me’ and he will close his eyes and take a deep breath. He will go from crocodile tears to a straight face, and now he will apologize for his behavior,” Nicole said. “You can use lots of things like blowing up balloons or blowing out birthday candles, it just has to be a distraction.”

Although Nicole and Robert began their foster care and adoption journey when they lived in Denver, they now live in Johnstown and are fortunate to have several relatives close by who are very supportive. They have also gotten to know other foster and adoptive families in their area.

“My mother and father-in-law and my sister-in-law and her family just live a few houses down, so not only were we becoming foster parents, they have become foster grandparents and foster aunt and uncle.”

“We exchanged looks and we both just started laughing. We didn’t speak in that moment, but I think we would have had a lot to talk about,” said Nicole, who says she has also been encouraged by her positive interactions with strangers who can relate to her situation.