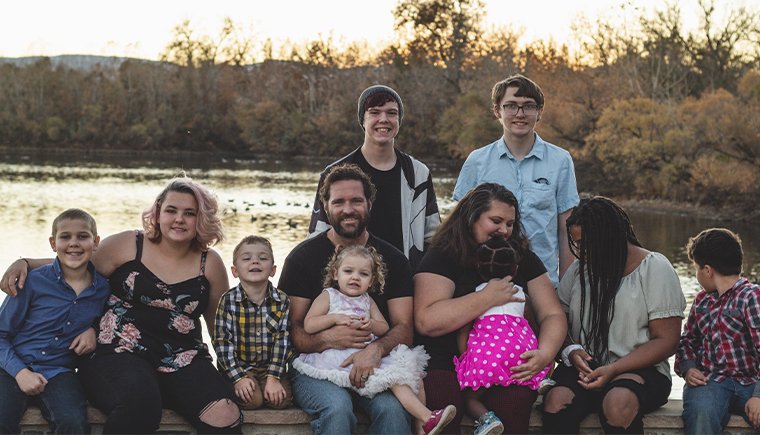 When Rebecca and Joe became certified as foster parents with Hope and Home three years ago, they had three biological children and one on the way. They got into foster care to support older youth and their parents while they got back on their feet. In addition to supporting relationships with biological families, they have been able to be strong advocates for their teen son Jesse whom they adopted last year along with his sister Leah. As a family of six, they remain dedicated foster parents with a total nine children and youth living in their home.

“My heart was really drawn to teens. To me, they are easier because they can take care of themselves physically and are easy to motivate,” said Rebecca. “If there's anything I can take a hands-off approach and give them control over, I give it to them. These kids have done a lot of things for themselves. So for a stranger to come in and be like, ‘Let me do that for you,’ is offensive.”

In a house with nine children, it is possible to get lost in the shuffle sometimes, but Rebbecca and Joe make an extra effort to ensure they create connections with each of their children and nurture them as individuals.

Although going from a family of four to a family of nine creates more limited resources, Rebecca notes that the perspective her biological children gain from being siblings in a foster family, such as learning compassion for others and gratitude, outweighs any sacrifices they may make. To give each child one-on-one time, all the kids have an opportunity to save up allowance or their agency’s play-money currency called ‘zoondoogles’ for solo dates with Rebecca or Joe to do fun activities they want to do. They also make sure each child has an opportunity to do things that interest them as well.

“Jesse is very much into Dungeons and Dragons, so he is in a Dungeons and Dragons’ club. Leah loves to help others and babysit, so we try to give her opportunities to do that. One loves theater and is in every school production, and another loves the outdoors and likes to go fishing and camping,” Rebecca said.

In order to honor their past, Rebecca and Joe have made efforts to maintain Jesse and Leah’s relationship with their biological father and their younger siblings who were also adopted.

“We feel like it communicates to them that we are not trying to replace anybody in their family. We're not a replacement set of parents. We're not ever going to be the people who are there when they took their first steps. And why would we deprive them of that relationship as long as the parents are safe,” said Rebecca.

Although they always have a busy house, Rebecca and Joe continue to provide respite care to other foster families as well as young people who have reunited with their biological families. In addition to long term foster care, Rebecca and Joe have been a caring presence for 30 children and youth whom they have provided respite care for over the last three years.

“It's my favorite. It's like the grandparenting of foster care. They get to come over, I get to spoil them and then I get to send them back,” Rebecca said. “It's also a gift that we get to give to other foster parents. If they're at a crossroads, it can help prevent disruption. That's really important.”

With seven school-aged children, two who are fully dependent learners and one who is a semi-dependent learner, all of whom were going to school remotely on devices on the wifi at the same time and two toddlers, the pandemic definitely created some challenges for the family. However, their community has rallied around them to support them through it. Developmental Pathways helped support their children with learning challenges, CASA volunteers poured extra support and attention into their children and youth in foster care, and they turned to their agency and fellow foster parents for additional help and support.

“Being fully dedicated to the physical, psychological and emotional needs of children that didn’t come from your own body is a unique set of skills and not everyone is called into that, but there are many people who feel called to help in some way, so we have reached out to pretty much everyone who ever said, ‘we want to help but we don’t know how,’” said Rebecca.

Rebecca also encourages those people who express a desire to help to jump in and start foster parent training.