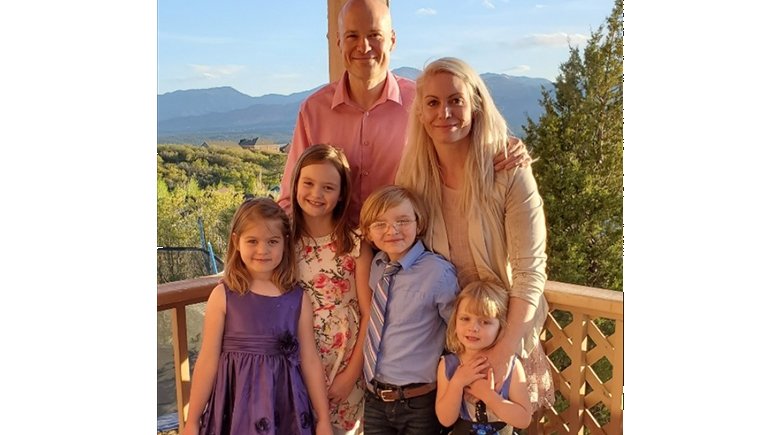 Cristin and Dylan moved to Colorado Springs a few years ago after accepting a military posting with the Canadian military. The couple always knew they wanted to adopt but it was never the right time. Then Dylan’s colleague told them how she had adopted two children in foster care. Learning they could adopt in the United States, Cristin and Dylan decided the timing was right and started training a few weeks later.

In addition to receiving training, Cristin and Dylan also attended matching events, looked at profiles of waiting for children and youth on the Colorado Heart Gallery, spoke to caseworkers and prepared their three biological children for life as a foster-to-adopt family.

“I would take them to a Starbucks to have a treat while we talked about what this process must be like for the child in foster care. I really wanted them to develop empathy and to understand that although this process might be difficult for them to adjust to, it would be that much harder for the other child. I also showed them pictures of children on the Heart Gallery website who were waiting for their adoptive homes," said Cristin. "My kids had a lot of questions about why certain children couldn’t just come live with us, so it was important to explain various reasons and why the process sometimes took longer than we had hoped.”

A few months later, Cristin and Dylan got a call about James whom they initially saw on the Colorado Heart Gallery. James was eight years old at the time and had been living with a foster family. After having been matched with James by the county and having several visits with James, they got permission from the county to invite him to go on a trip with their family to Kentucky to visit Cristin’s father. During the trip, Cristin and Dylan invited James to be a part of their family.

“He just looked at Dylan and I and said, ‘Yeah, I want to live with you forever,’” said Cristin. James was officially adopted in May 2020. James was assessed as having various learning difficulties but has made great strides thanks, in part, to Cristin’s 20+ year career as a neurodiversity consultant. Her expertise in working with children and adults with ADHD, autism, dyslexia and other learning differences made her especially well suited to parent James, plus she says, “James makes it easy. He’s such a beautiful child, always looking on the bright side of everything.”

“Patience is something that we all have, but it only gets developed by understanding where the other person's coming from. Most parents don't understand what it's like to be autistic or dyslexic or what it's like to have ADHD,” said Cristin who offers advice for other parents who are helping children overcome learning challenges. “You must be willing to say that this is actually difficult for you and then understand why it’s difficult. Where is that little nugget of difficulty? For example, there's something about that math problem that they're having difficulty processing. It's not the entire problem.”

“It helps you to be more patient with yourself. Most of us aren’t even patient with ourselves, so it’s that much harder being patient with someone else.” said Cristin. “Mindfulness also helps you to understand your triggers and your judgmental mind, so you can start noticing it and changing it...towards yourself and others. I honestly can’t recommend mindfulness enough.”

Whether it is helping teachers make smoother transitions in the classroom or it is helping military families who are moving their children across the country, Cristin also had some helpful tips about how she has moved her children to new cities and will eventually move back to Canada with James, who has never been there before.

“We take pictures of what school they're going to be going to, the city we're going to and just create a ton of visuals. If you get to go on a house-hunting trip, take something that's precious to them and take pictures of that precious thing in that new environment, so they can actually visualize it,” said Cristin.  “Sometimes it is hard to visualize something that's so huge, so people might develop fear around the unknown. If we have some kind of visual, then they know a little bit and that's very helpful.”

Since joining the family, James has learned to ski and, this year, he is learning to snowboard. Every Sunday all the children take music lessons over Zoom with Dylan’s father. James is enjoying learning the guitar. He is also enjoying being an older brother to Cristin and Dylan’s two younger daughters and has a close relationship with Cristin and Dylan’s oldest daughter, Charlie, who is also nine.

“Charlie needs help in math, and James can help. And she is an incredible reader and so she's able to help him with reading. It's been interesting to see because they have struggles with control for sure, but I'll catch them helping each other with cleaning their rooms or something that one kid is better at than the other, which is just great to see.”

As well as seeing positive changes in James, Cristin has also seen changes in how her biological children think and relate to others and how they see their futures. Cristin’s daughters have already expressed that they would like to grow up and have both biological and adopted children as well.

“When they play house, they adopt children. They play with their dolls and their dolls have adopted kids and they have biological kids. It opened their minds to the reality that everyone’s circumstances are different which has developed their empathy, which is my biggest goal as a parent of any child,” said Cristin.

Cristin and Dylan hope to continue to foster and are open to adopting more children, especially older children. Looking back on the process of adopting James, they see the difficulties in the process as being incredibly worthwhile and want others to realize that it isn’t as challenging or expensive as it is often believed to be.