The Road to Reunification: Helping Families is this Family’s Passion 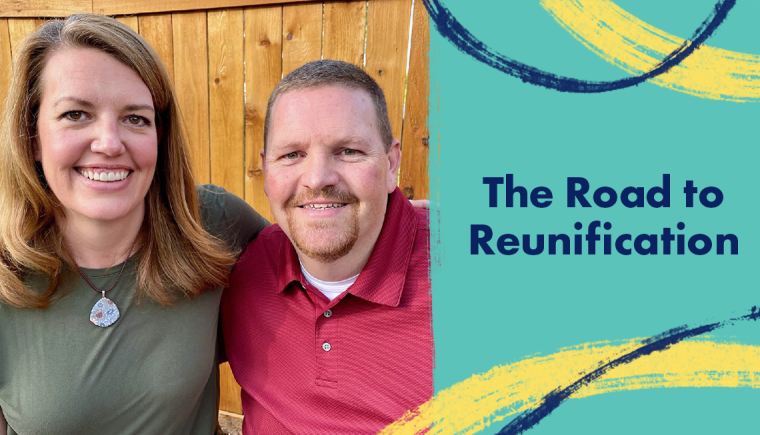 Charles and Erin Keyes first learned about the Court Appoint Special Advocates (CASA) program from a story on a local news channel in the autumn of 2019. Two years later they were named the CASA Volunteers of the Year in Adams County.

It was a well-deserved recognition as Charles and Erin work tirelessly to support the families with whom they serve as CASA volunteers.

After seeing the news report about the need for more CASAs, Charles and Erin reached out to their local CASA program, CASA of Adams & Broomfield Counties, and signed up for the training that all CASAs must complete before they begin working with families. Charles and Erin were sworn-in as CASA volunteers in January 2020, and took their first case just a few days later. The Keyes had not planned to work together on cases, but their CASA supervisor felt they would be an effective team to support a family with three young children. It turned out to be an enriching experience for both of them and the family they supported.

Charles and Erin visited with the family twice monthly and because they worked as a team, Erin could spend time with kids while Charles spent time with the parents. Afterwards, they would come back together to discuss any progress or concerns. This approach to supporting the whole family played an important role in the outcome of the case, which ended with the family being reunified after the parents did the hard work and heavy lifting to ensure they were providing a safe and stable home for their children.

At case closing the judge commended the parents for their hard work and dedication, and recognized Charles and Erin for their commitment that helped change the trajectory not just for the children, but for the entire family. The father asked Charles and Erin to stay in touch with his family, noting that they had been one of the most positive things in his and his children’s lives.

“As CASA volunteers, Charles and Erin understood their role was to be invested in the children, looking out for them, ensuring that their needs were being met and that they were healthy and safe. However, they also realized that advocating for children means supporting their caregivers as well,” said Lindsay Salas, CEO of CASA of Adams & Broomfield Counties. “When the father found out that CASAs were assigned to the case, he admitted he was skeptical of someone else who would tell them what to do. He did not expect them to be so loving and caring, and he quickly discovered they were committed to supporting and strengthening his entire family.”

A CASA is a trained volunteer who advocates for children who have experienced abuse or neglect to ensure they are in a safe and stable home. In a child welfare case, the magistrate or judge will appoint a CASA as an additional support for the family.A CASA is a consistent, supportive presence in the life of a child for the duration of the case, getting to know the children and parents involved.

“It is important for kids to be part of their family and they form a strong bond from an early age,” said Erin. “Kids deserve to know without a doubt who they belong to and that they have a place. Reunification should be the ultimate goal so kids know they belong.”

For Erin, the best part of being a CASA is getting to know the families, and for Charles it is the positive impact he can have on the lives of kids.

“Sometimes, just being a sounding board and someone that parents can talk to is so important,” said Charles. “Seeing this family come back together because the parents met their challenges head-on and rose to the occasion was so rewarding.”