The Road to Reunification: Fighting for What Matters Most – Our Kids 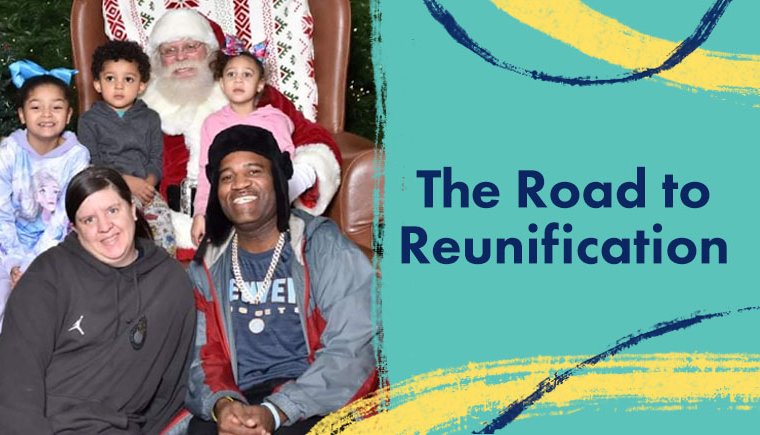 When Chris and Crystall’s three young children were placed in foster care in the autumn of 2019, the family was facing hard times. They did not have stable housing or income and Chris and Crystall were battling addiction. It was a traumatic and upsetting time for everyone involved.

The children spent two years in foster care while Chris and Crystall worked diligently to get and stay sober, secure employment and set up a home for the family. It was not an easy journey.

Chris remembers the day he decided to get sober. It was his daughter’s birthday, and she was in foster care. He had arranged to meet up with his daughter and her Court Appointed Special Advocate (CASA), Cathy Stamps, at a park. He was unable to buy a birthday present for his daughter but Cathy brought a present for him to give her. It hurt Chris that as a father he could not provide for his children, and he made a promise to himself there and then that he would never again put anything or anyone before his kids. That was Chris’ turning point.

“That day lit something inside of me. I told Crystall we were going to do this. We’re getting our kids back,” said Chris. “That was the day that everything changed for me.”

Initially, Crystall didn’t believe it was possible for her to get sober. Her turning point was a sober living home where she learned how to make meaningful change. “I can say with pride that I chose my kids over drugs,” said Crystall. She has been sober for more than a year, and intentionally maintains her sobriety by attending Narcotics Anonymous meetings.

Chris and Crystall put in the work. They took parenting, life skills and domestic violence prevention classes, and completed substance abuse programs to tackle their addiction. They were always present for their children and never missed a visitation, even when the pandemic restrictions made things difficult. They both got jobs and moved into a hotel until they saved up enough money to get their own apartment. “We eventually got out of our own way. It was hard but so worth it,” said Crystall.

While Chris and Crystall worked on creating a stable home life, their children were in foster care. They changed foster homes twice and ended up staying with the last family in a safe and supportive home for almost two years. Chris and Crystall still have a good relationship with those foster parents and have stayed connected to them in order to maintain a stable support system for their children.

“Chris and Crystall's tenacity in the face of many hurdles inspired those of us who were involved in the case,” said Cathy Stamps. “They overcame addiction, homelessness, lack of employment and other personal concerns to make reunification possible, and they continue to persevere against the challenges they face. It was my pleasure to support them at this difficult phase in their lives.”

Chris and Crystall learned a lot on this journey. They learned that they can be resilient and fight for what matters. And that their children are resilient too.

Throughout it all, they had a team behind them, supporting all the positive changes. Chris and Crystall refer to them as “our team” because it really was a team effort - all working towards the same goal - and they never gave up on them. In addition to Chris’ family and Cathy Stamps, the team included Crystall’s social worker, the Griffin’s El Paso County caseworker and Chris’ life skills worker.

“Mark was like a best friend to me. He called me every day and one time we talked for more than four hours,” said Chris. “He was willing to have tough conversations with me and was straight forward about the changes I needed to make. He helped me see that I had to stop blaming other people, be accountable for my choices and take action to change our situation.”

“Getting our kids back was the best part,” said Crystall. “We are celebrating holidays together as a family once more. I cherish every little drawing and project that the kids bring home from school. We are whole again.”