Conversations with a dentist on reporting child abuse and neglect 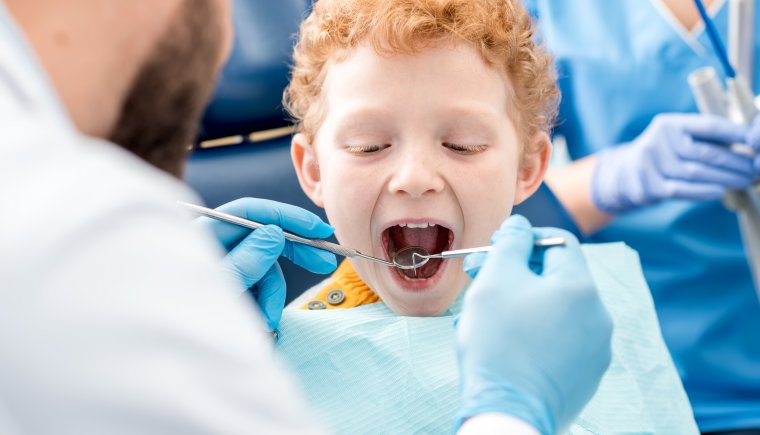 For February, National Children’s Dental Health Awareness Month, CO4Kids reached out to pediatric dentist campaign partners to feature the role they play in identifying, reporting and preventing child abuse and neglect as mandatory reporters. A study by the American Association of Pediatrics (AAP) states craniofacial, head, face, and neck injuries occur in more than half of child abuse cases.‍ Dentists play a vital role in being a voice for a child who may need help.

Junior Smiles Children’s Dentistry of Thornton, Colorado signed up as a campaign partner with the Colorado Child Abuse and Neglect Awareness Campaign in 2017. Dr. Dylan Bordonaro serves as a dentist there and is a co-owner of Junior Smiles.

Conversations with a dentist: reporting signs of child abuse and neglect

When Dr. Bordonaro enters the room, it’s easy to see why it’s been said he instills confidence that gives kids the courage to actually sit still and get through dental treatment. Many times, there are even high fives and laughs at the end of the appointment. As far as he’s concerned, a day with a dentist appointment should be a great day for everyone.

In young adulthood, Dr. Bordonaro was always working with kids. He was a youth counselor as a teen and has always found that the most genuine and rewarding experiences are helping children. It didn’t come as a surprise when, during his general practice residency, parents and team members began to encourage him to pursue pediatric dentistry. He made the kids and parents feel comfortable.

“We don’t want to treat our youth patients like a number or just a set of teeth,” explained Dr. Bordonaro. “There’s always someone attached to the other end of those teeth, so we take our time with each patient and get to know them.”

As most can imagine, during this caring process, he learns a lot about each patient.

When asked about a dentist's vital role in discovering signs of child abuse and neglect, he said, “You know, that is a huge deficiency in our field. I believe many dentists don’t want to broach that subject for fear of offending parents. They fear that the parent would be blamed. But it needs to be talked about, even if just talking about it preventatively. Child abuse and neglect is typically reported on a case-by-case basis as a reactive decision when it has already happened, but not a proactive one. I would like to see more forums and discussions in the dental community about identifying, reporting and preventing child abuse and neglect.”

In addition, Dr. Bordonaro called for more education in the dental community about child sex trafficking, now a part of Colorado’s statutory definition of child abuse. The AAP cites that more than one-quarter of children who are victims of human trafficking will see a healthcare professional while in captivity. “It needs to be brought up when lecturing, when learning in residency and every step needs to be taken to ensure these victims are identified and are safe,” he emphasized.

Sometimes, when interacting with kids, Dr. Bordonaro says pediatric dentists can recognize signs that concern them beyond typical anxiety experienced when a child is going to the dentist.

Beginning in residency, he began to learn what mandatory reporting of child abuse really meant on a whole different level.  It was the first time he encountered situations where he felt “that gut check” like something wasn’t right accompanied with technical signs that he was trained to identify.  He knew he couldn’t discount his concern and made a report.

Dr. Bordonaro encourages other dentists that it’s normal when learning the profession to have a kind of hesitation, wondering if reporting is the right thing, but then, just make sure to follow through because it’s acting in the interest of both parties. “As dentists, we are mandatory reporters, so we need to report questionable signs even if we feel it may be inconclusive.”

Signs of child abuse and neglect in dentistry

“You know, you can learn a lot from a child’s mannerisms and speaking to their parents or caretakers. Sometimes even in the way you ask questions to the child and how the child looks back to the caretaker, how the caretaker looks back to the child,” said Dr. Bordonaro. “You then separate the two and can ask the same questions. If the stories don’t line up, for me, that’s enough suspicion to call 844-CO-4-KIDS and make a report, just in case.”

When considering signs in both boys and girls, it is important to take into account the age of the child. For example, if there are a papilloma lesion(s) (oral warts that can be transmitted by contact with the genitals during oral sex) in the keratinized tissue of the mouth, I have to consider their age. If the child is an older teen they are more likely to be sexually active and maybe that’s plausible, but if it is a young kid, you should not be seeing that in a young kid. It just shouldn’t be there.

Another sign to mention is petechiae, or pin-point bruising, which is from a blunt force trauma to the soft palate or back of the throat, essentially. It can happen when they have mononucleosis or coughing strongly, but if they don’t have a recent medical history of that, there is a problem and the dentist needs to investigate. This could be a sign of sexual abuse.

One of the more difficult things to identify at times is child neglect.

“Dental neglect,” Dr. Bordonaro explained, “is when you feel that the parent or caregiver was coerced to come in. They’re not receptive to speaking to you about the child, the treatment they need, and either challenge the recommendations or ignore them. In cases like these we have to track kids that are susceptible or in danger of having abscesses and full body infections which could cause sepsis. There have been cases in the U.S. where children have died from dental abscesses and not all parents understand the seriousness of the risk to neglect dental treatment. We track if they break multiple appointments or do not show up for a surgery. If so, we have to give a warning to the parents that we may have to report the situation to child protection services. “

“Sometimes, what may not be considered as neglect or may be confused with neglect is if the parent or caretaker simply doesn’t have a way of getting to the hospital or they can’t afford it. I’ve seen this happen before in my residency and practice. In these instances, we have offered to pay for a cab, or break up their appointments and services into payment plans. If they decline this, then I have a suspicion and I’m concerned, and it needs to be reported as potential neglect for the safety of the child.”

When asked what he would say to other dentists who may be hesitant to report signs of child abuse and neglect, Dr. Bordonaro immediately said, “If you have to second guess yourself, or ask multiple questions to yourself, you should report it. That is suspicion to the letter. I think a lot of people feel like they have to prove beyond a shadow of a doubt they know they’re right before they actually make the call to report, but you don’t. It’s better to report something and be wrong in your suspicions than to let suspicion go. If something happens to that child, not only is that also on your conscious but you’re legally bound and responsible as a mandatory reporter for not reporting the signs. If you see something, you need to say something.”

“I would encourage dentists if they don’t feel comfortable or if they’re unsure of things to learn more about it. For the ones who do and have the training, I urge them to get out into the community and offer a thirty minute lecture, get in touch with schools, do something where they can have the whole community come in and learn; start conversations proactively preventing child abuse and neglect before it happens.”

We all play a role in preventing child abuse and neglect.

If you see signs of child abuse or neglect, report immediately to 844-CO-4-KIDS (844-264-5437). To learn more about the signs, visit CO4Kids.org and consider taking the Colorado Department of Human Services Mandatory Training online, found HERE.