A Father’s Guide To Creating Your Own Adoption Path 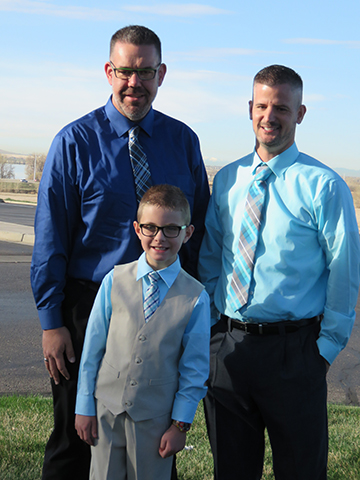 Ben and his husband Russ adopted their son Junior last year and they quickly paved their own path. “When you Google ‘adoption’ there is no clear path forward, so we created our own,” Ben said. We recently spoke with Ben and asked him what advice he would share with others on the adoption journey.

Get Help: Prior to being matched with Junior, Ben and Russ knew they needed an experienced agency that would be supportive of an LGBTQIA family. They found that partner in Adoption Options. “At times we were a little bull-headed and thought we could handle raising a child from trauma on our own,” Ben says. “Eventually, we just picked up the phone and called Adoption Options, because they had been doing this for some much longer. We couldn’t have done it without them.”

The same goes for the County Department of Human Services, which provided support services. “Immediately after Junior moved in, we started in-home therapy,” Ben says. “The county worked with us and gave us all of the services we needed so Junior could thrive. The best thing we did was take advantage of that support right away.”

Know What Your Values: “We’re both from the Midwest, and we value family and keep those connections even though we live far away,” Ben says. For he and his husband, it’s important that Junior understands the value of family and friendship and how to nurture those relationships.  “We’re also aware that we need to always be positive role models for Junior. We would explain everything we did and why, because if something wasn’t said or explained then we didn’t know if Junior understood.”

Take Care Of Yourself: “It’s difficult to take time away, because you don’t want your child to feel like someone is giving up on him again,” Ben says, knowing that many foster and adoptive parents feel the same way. “However,” he adds “after making sure that the child is safe and secure, you need to make sure that you can keep providing that by taking care of yourself.”

After friends stepped up volunteered to give the couple time away, Ben and Russ realized respite care had an added benefit: “Junior met other adults in our lives who care about him and will keep him safe. It’s important for Junior to have exposure to other adults who aren’t his dads, because he gets to learn from them, too. ”

Don’t Give Up: “All of the sudden people who you didn’t know yesterday — the caseworkers, the Guardian ad litem, the agency — are all involved in your life. It’s intense and you’ll have doubts, but don’t let a kid slip away.”

Children and youth in foster care are finding families every day. Learn more about becoming a foster and adoptive parents on the CO4Kids website.